Wat Chalong (Thai) or Chalong Temple (English) is the largest and most visited temple in Phuket. Among 29 temples, Wat Chalong is the famous one formally known as Wat Chaiyathararam located on Chaofa West Road of Chalong, Phuket. It is just 8 km away from Phuket city, 38 km from Phuket International Airport, 16.3 km from Patong and 3 km from Chalong Circle.

No one knows the exact history of Wat Chalong’s establishment. But some people guess the main Wat was established in the current location in 1837, during the reign of King Rama II.

Later, the premises of Wat Chalong had been developed with other buildings. Many conventional tales about it are heard. One of them is “a rebellion between Phuket locals and Chinese immigrant mine workers during the 1870’s”.

Local Tin mine owners interfered to stop opium growing by Chinese migrants. A turbulent situation was developed from this issue. The Chinese made an Angyee Society to attack the provincial hall and finally killed some people. Some locals were frightened, and they did not understand what to do and where to go. They took shelter in Wat Chalong and informed Luang Poh Chaem (1827-1908), the Abbot of the Wat Chalong about the imminent danger. As a monk, he assured people not to be afraid and made a safe zone for them. He gave them white headbands and motivated them to fight against Chinese workers whenever they would attack.

Afterwards, the Chinese attacked the Wat and broke the walls. The sign of broken walls is still evident today. Locals fought against them for a long time. Although the Monk was not engaged physically in the fight, he performed a miracle. After a long fighting, locals won and they were very happy. In this way, many tales are conventional about Luang Poh Chaem. Lah Poh Chuang was also a Monk. Both were great carers of the locals through some herbal treatments and walking stick miracles. The news of victory reached the King Rama V, who invited the Monk Luang Pho Chaem to the Bangkok Royal Palace. The king bestowed him the title of “Phra Kru Wisit Wongsacharn”. 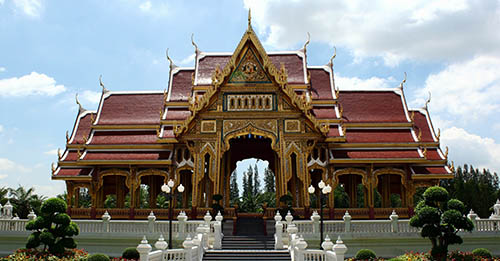 The Bot or Ubosot is the prime part of this Wat used as the main prayer room and ritual activities. Many golden sculptures of abbots including Luang Pho Chaem and Luang Pho Chuang are kept in this main hall of Wat, and people pay their respects to them. People enter the Ubosot and show their reverence by presenting flowers in front of sculptures & golden leafs on the Monks’ body and pray for future welfare. A Buddha mural and Jataka tales have been painted on the walls that describe the life history of Lord Buddha.

Chedi and Relic of Buddha 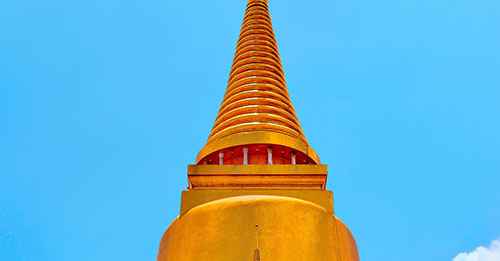 The grand pagoda called Phra Mahathat Chedi is a 61.9 metres high conical sacred building. The whole Wat Chalong is mostly revered for keeping the relics of the Lord Buddha in Chedi, which was brought from Sri-Lanka in 1999. Phra Borom Sareerikatat is the name of fragment of Buddha’s bone that was firstly installed behind glass at 60 metres high at Phra Mahathat Chedi by HRH Crown Prince Maha VajiralongKorn.

The exterior of Chedi is adorned with intricate sculptures of Buddha resting in the beachfront window. Inside of this Chedi is full of sculptures represent east, west, north, and south parts of Thailand. Most of the natives pay their religious respect to Chedi to get a merit. These paintings are lessons of learning to tourists.

Mondop or mandapa is a square designed pavilion where some scriptures or holy items are kept. 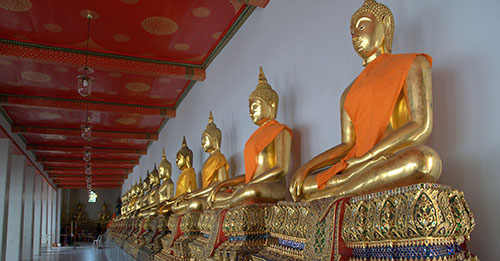 Viharn or Wiharn looks like an Ubosot where Buddhist and monk ceremonies take place. It is full of Buddha images and used for praying. In the rainy season, it is also used for travelling monks’ to stay.

Sala is a rectangular pavilion that provides shelter and resting. It is used for praying.

Identifying Crematorium is easy through the high chimney. The crematorium is for burying the dead. The relatives of dead people bring dead bodies to the Wat for burning the body. The belief of locals is that a dead person will get a merit for their eternal life through burning his body. 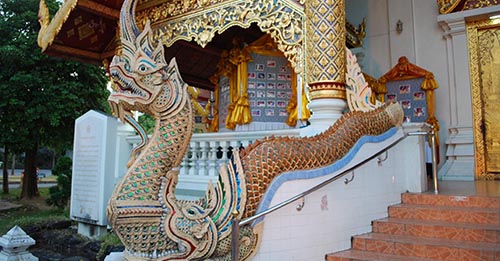 The beautiful garden, nice fountain, Naga serpent, sema stones enhance the beauty of this Wat. They bear the religious value as well.

As Wat Chalong is a holy place to Phuket natives, everyone should follow these formalities:

According to Thais belief, the bell of Wat Chalong spreads the wisdom. Wisdom removes confusion. Wat Chalong is a place where people of Phuket pray for peace and prosperity.

Wat Chalong remains open from 07.00 to 17.00 every day. The entry is free. Your contributions are welcomed for the development of the temple if you want. During the festival of Chinese New Year, it turns into a crowded place for 8 days.

The 6 best water activities around Phuket

Sailing Yachts, the perfect way to discover the Andaman Sea

Most desired Hotels in Phuket

Build a Tour According to Your Wish

Thanks for checking out our new web platform at PhuketNow.com.
We’re live and under development.

You can also send us your enquiry using the Post Office of PhuketNow!