Phuket Vegetarian Festival (or Nine Emperor Gods Festival) is a famous 9-day Chinese festival. It is held in the 9th month of the Chinese lunar calendar. It happens between September and October of the Gregorian (internationally used) calendar.

This festival takes place in the immediate vicinity of the 6 Chinese temples in Phuket. It starts from the main temple named Jui Tui Shrine located on Soi Phutorn, Ranong Road, close to Phutorn Kanchang Shop.

Origin of the Phuket Vegetarian Festival

Phuket Vegetarian Festival origin is unknown but it is commonly believed that this festival was first launched by a Chinese opera group who became sick with malaria while performing in Phuket. They decided to adhere to a vegetarian diet and prayed to the Nine Emperor Gods to come round from illness. Amazingly, the opera group completely recovered from malaria. This sparked a great curiosity among the Phuket people, who asked how it was done. The answer came that ritual vegetarianism with associated ceremonies had been the cause, and Chinese people accepted this as a faith very enthusiastically. Thus this Phuket festival started and it was 1825 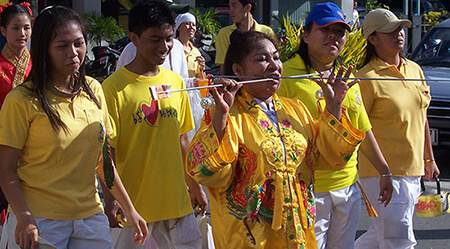 The first event of Phuket vegetarian festival starts with the raising of the poles. A great pole named Go Teng pole is raised at each Chinese temple in the afternoon before the festival begins. At midnight the pole is hung with nine lanterns, indicating the opening of the festival.  Two important gods named Yok Ong Hong Tae and Kiew Ong Tai Tae are invited down at midnight to preside over the ceremonies. Besides this, other ceremonies including invocation of gods (Lam Tao and Pak Tao) and procession of gods’ images also take place during the festival. Fireworks and drums playing continue throughout the whole festival and it is said that the louder they are the better, because noises drive away evil spirits. During street processions, visitors can see participants walking along the streets or can join them.

One of the most thrilling aspects of this vegetarian festival Thailand are shocking ceremonies which are performed to invoke the gods. Bladed ladder climbing, fire-walking, body piercing with metal pins and other acts of self-mortification become the most outstanding. The participants of these actions act as the representatives of the gods.

Men and sometimes women puncture their checks with various items, including knives, skewers and other metal objects. People believe that the persons who will do these activities will be protected by Chinese gods from harm. These activities of Phuket vegetarian festival piercing are not recommended for the faint-hearted people to witness.

Participants of this Thai vegetarian festival stick to a vegetarian diet for varying numbers of days, usually more than three to make themselves strong in mind and body. They also refrain from all vices, eating animal flesh and killing creatures. They usually wear white and yellow dresses.

Apart from the witness of this vegetarian food festival, visitors can consume amazing cuisines specially prepared for this festival. These dishes are available at street stalls and markets around Phuket. To find vegetarian food stalls, you have to look for yellow flags with red Chinese or Thai characters.

To remember about Phuket Vegetarian Festival

You have to bring a mask and ear protections to be saved from much smoking and firecrackers sound of Phuket vegetarian festival. You shouldn’t forget to bring a camera to take amazing photos of this Phuket lantern festival as well.

Phuket Vegetarian Festival is one of the oldest and most respected spiritual festivals, which signifies good hygiene habits, inner peace, brightness, happiness, love and fun. It also offers the believers a great opportunity to exhibit the depth of their religious faith.

Most desired Hotels in Phuket

Build a Tour According to Your Wish

Warning: Invalid argument supplied for foreach() in /home/customer/www/phuketnow.com/public_html/wp-content/plugins/formcraft3/formcraft-main.php on line 992
Welcome to PhuketNow!

Thanks for checking out our new web platform at PhuketNow.com.
We’re live and under development.

You can also send us your enquiry using the Post Office of PhuketNow!